Have you ever dreamt of staying awake till the first flush of morning around a bonfire, roasting marshmallows, jamming to soulful music, having deep conversations with strangers, all under the naked sky laden with stars? Seems dreamy and right out of a book right?

Well, all of this actually did materialize last weekend and I can’t seem to stop gloating about it, so here’s a detailed blog on all that went down.

The republic day long weekend was around the corner and I had no plans whatsoever. I was frantically searching for something close by , some place I have never been before, some place I could go solo and still have a great time. Having heard of BandCamp earlier, I had been meaning to go and this seemed like the perfect weekend. The very fact that it’s close to Mumbai, yet far from it’s hustle made it an ideal choice.

A spontaneous affair, I booked my tickets on Friday night and by Saturday afternoon, I was on a Virar Local headed to Bhayandar. Sandwiched between a wailing child and an angry vegetable seller , I managed to reach Bhayandar intact. As per the instructions on the website, a certain bus number 1 was my magical ride to the camp. Without much hassle, I found myself into bus number 1 and was off on a nice breezy bus ride for about 15 minutes, until a wedding band , barring the bride and groom dashed into the bus. Now, I had a bus full of men decked in bright blue holding all sorts of instruments surrounding me, and a brass resting on my shoulder. A musical start, I must say!

As a perfectly unfit me was huffing and puffing after a steep stretch of barely 500 m, I was greeted by an enthused bunch of volunteers who checked me in, gave me my goodie bag, sleeping bag, inflatable pillow and a friendly assurance that I could chill with them by the end of the night if I had not managed to make any friends. I did take them up on that offer, not because I hadn’t manage to get chatting with others, but because they were a really fun bunch.

After I settled into my cozy tent , I ransacked through my goodie bag, and was a proud owner of some much required camping necessities I had clearly not packed –  Mosquito repellent ( I would have been nursing myself off Malaria by now if not for this), a tiny torch ( definitely would have stumbled on the undulating platform if not for this one ) , a sanitizer ( bless all the times I ate directly after petting the adorable stray dogs loitering around) and a few postcards!. I changed out of my travel clothes, walked around a bit, clicked a few pictures and then found myself a snug nook and read my copy of Delirious Delhi until everybody seemed to be gearing up to go somewhere. 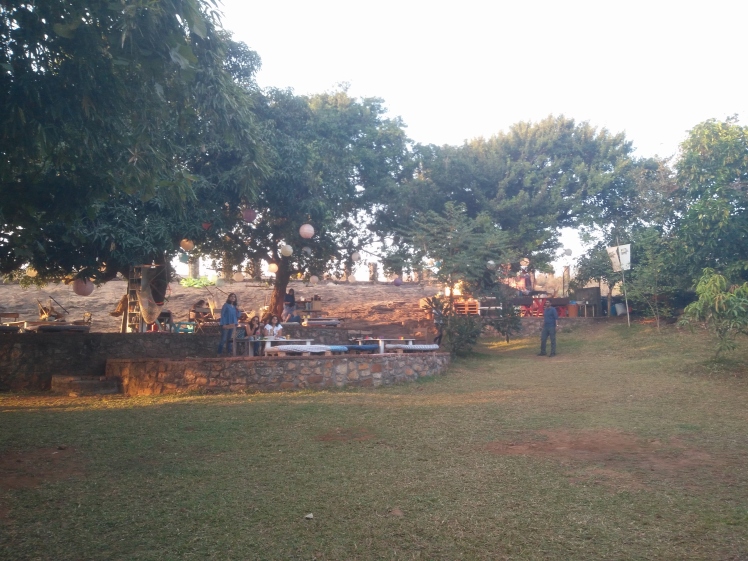 We were going to go watch the sun set by the beach! I waltzed into my shoes, ever ready for an adventure and joined the clan for a short trek down the cliff. We first reached the highest point on the cliff and then made our way down to the beach, through the fisherman village of Uttan . After 15 steep minutes, we landed bang on the rocky beach.

During our walk through the village, I caught a glimpse of the fishermen community squaring up their day’s catch. Cleaning the fish, drying them , hanging them out in lines all while cheerfully smiling at us passersby. The kids were doing their bit by running behind broods of chicken and ushering them into coops. Also, the bright blue band from the bus was in front of me once again! They were now merrily playing loud baraati music and escorting a newly married couple. The brass player and I briefly exchanged a smile of acknowledgement after which I hurriedly trod off to the beach, lest I miss the sun set. 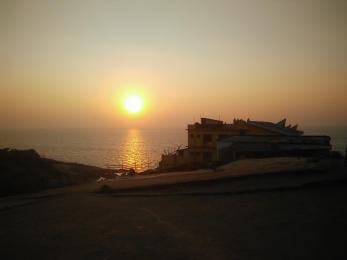 I stepped out of an array of closely built houses and lo behold!, in front of me stretched a vast expanse of blue sea, speckled with boats, puddle like tiny inlets and miles of reddish pink sky.  As the tide was high, the black sand beach was entirely covered, however, we could go all the way down and sit by the waves kissing our feet. 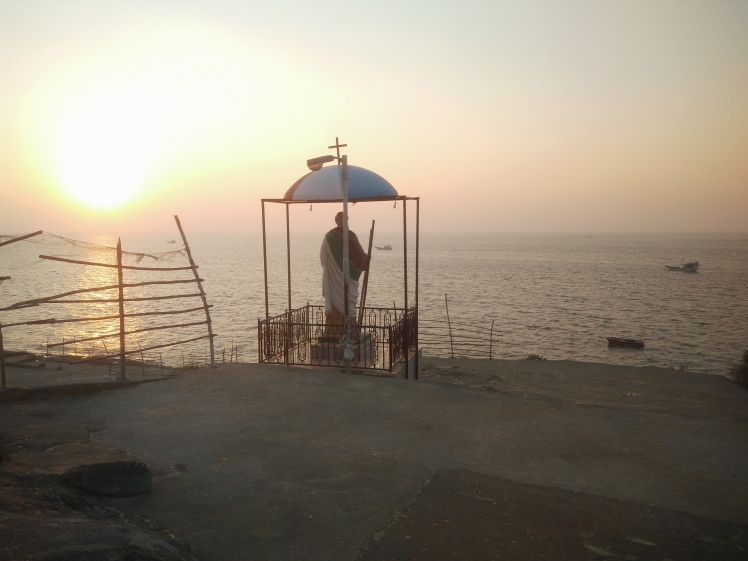 My aqua-phobia pushed me slightly atop , away from the water lashing against the rocks, to a comfortable flat stone by an inlet. I sat there for the next 20 odd minutes and experienced a calm like never before. Pardon me if I sound poetic or philosophical, but sunset’s are truly magical. It’s one of nature’s most soothing phenomenons and I can’t seem to get enough of them.

When the sky turned mulberry,  we trekked our way back up and built a nice appetite for the barbecue that awaited us . The camp was lit ( pun intended ) with dim paper lanterns that radiated a certain charm I instantly fell in love with. After changing into my pj’s for the night, I went back to the hammock and lazed around with my book for a while until the aroma of slightly charred sausages and chicken wafted past my nose.

I filled my plate with jacket potatoes, mushrooms, sausages, chicken, paneer and a moreish butter garlic dip, multiple times. Firstly, because I was starving and secondly, I was under the impression that the barbecue was dinner. Funnily , those were just starters. Dinner was all out malwan cuisine – rice, fish and their preparation of chicken. Well, I nibbled that too. How can a malayali say no to fish! 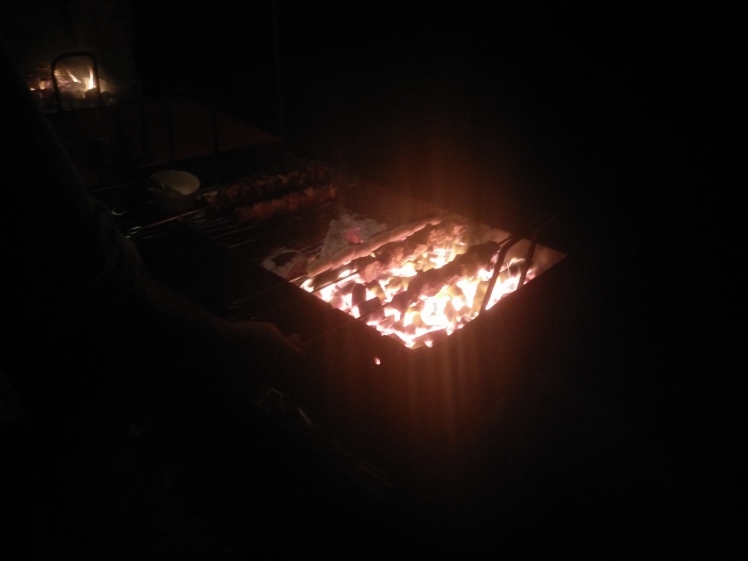 In between all this munching, I had managed to strike a conversation with a couple of campers and was no longer the lonely girl with a book ( though I have absolutely no qualms being known as that). It’s always fun getting to know people, listening to different perspectives, sharing your own, learning about their experiences and absorbing all you can from various conversations floating around.

By this time, the sound check was done and the bands’ were all set to roll. So was I , with my pint of beer , cushions and rug to lounge on . Nookie Jar and Awkward Silence were the bands’ set to play that night. Honestly, I hadn’t heard of either of them, neither did I know what genre they were into. When I booked my tickets, I decided not to give them a hear on YouTube because I wanted my first experience to be a live one. Needless to say , I absolutely loved them both and as I write, I have Paper to Pen by Nookie Jar giving me company. 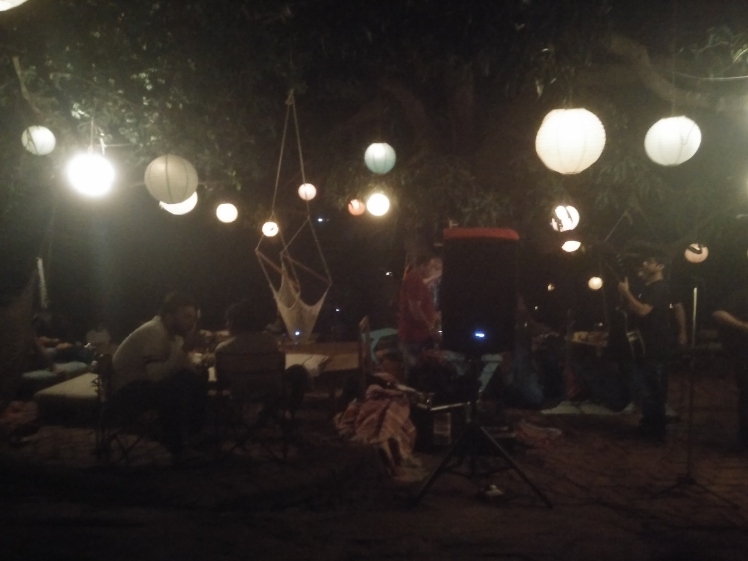 The night was getting chillier and the band performances were coming to an end , so we shifted the party over to the bonfire. We sat around, roasting marshmallows and making smores with nutella, jamming to stirring music, singing along in our feeble voices and enjoying every bit of what was happening around.

Conversations and music flowed till wee hours of the morning and just before the sun came back up, a drowsy bunch stumbled back to their tents. I didn’t want to spend my last few hours at camp sleeping, so I jolted awake at 8 am, downed 2 cups of coffee and plonked on the hammock.  Soaking in the morning sunshine, I read my book rather blissfully. People started trickling out of their tents and soon everyone was around chattering away before heading back home. 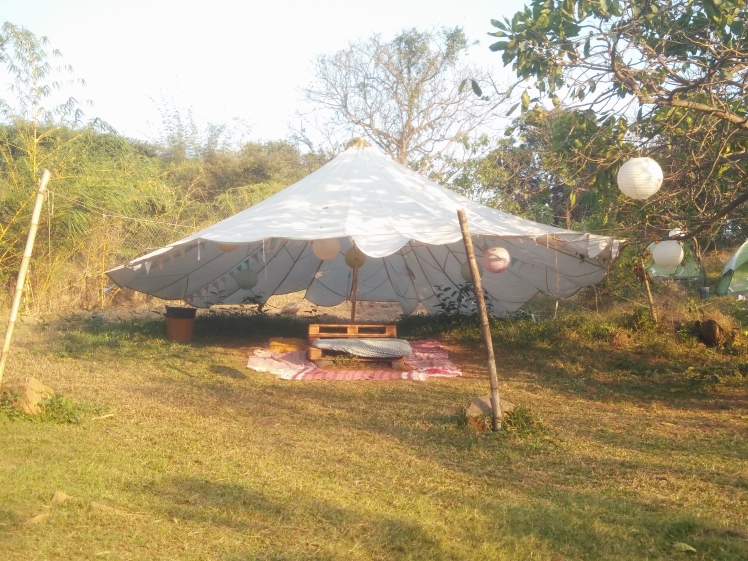 I was pretty bummed out about leaving , but all good things come to an end and better things pop up sooner or later, so I headed back, lingering with hopes of coming back some day again. I walked in alone, but left with a bunch of newly made friends and whole lot of memories. Quite the ideal weekend!

A few traveler tips, in case I have lured you into heading for BandCamp next weekend :

This site uses Akismet to reduce spam. Learn how your comment data is processed.